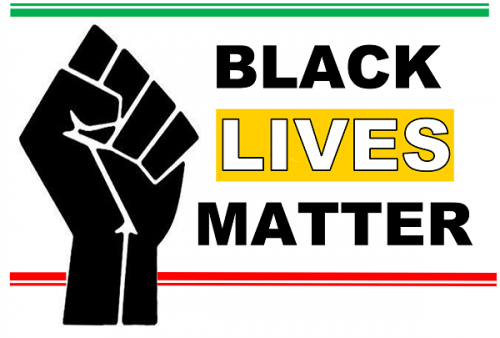 In our latest blog post, we move away from veterinary medicine to discuss current events. Kinship Animal Hospital’s core values are openness, honesty, and integrity. As such, we feel it necessary to have an open and honest discussion of the current state of racism in our country. In our blog post, our amazing receptionist Courtney provides her thoughts and feelings about what it is like to live in America as a Black person today. Kinship Animal Hospital stands in solidarity with Courtney and all our Black community in Richmond.
If you have been keeping up with current events these past two weeks, the Black Lives Matter protests around the country, and around the world, have sparked a revolution that has been a long time coming. We are in the streets calling not just for an end to police brutality, but an end to white supremacist ideologies and systematic racism. We are protesting for change to a system that was built to subjugate African Americans; one that constantly keeps its knee on our necks. It is a system that does not value Black lives or even see us as human, instead considering us a constant threat, and which keeps a target on our backs because of the color of our skin.
Imagine that every time you leave your house, you have to remind yourself to stay alert and not look “too threatening” because today could be the day you get a cop called on you.  The police have become involved due to a black person doing the following things: not using a turn signal while driving, hosting a BBQ at the local park, waiting for a friend at Starbucks, opening a lemonade store, working out at the gym, golfing, moving into an apartment, shopping, playing video games, asking for directions, eating lunch, delivering packages, redeeming a coupon, selling water bottles, bird watching, napping in your university common room, being on the phone in your front yard, swimming in the pool, helping a homeless man, working as a firefighter, jogging, sleeping in your bed in your own house, being accused of having a counterfeit $20 bill, and many more incidents that have not been caught on film.  Black people have been regularly threatened or killed for having the audacity to be black in public.
While watching these videos of the black men and women being murdered by cops, when watching someone put his knee on George Floyd’s neck, imagine it’s your father, mother, brother, sister, or your child, begging to breathe, calling out your name with their last breath while being murdered by the very cops that have sworn to protect them. To protect you. When you imagine this, really feel the disgust burning in your gut at the thought. Hold on to it and remember that many of you have the privilege to feel safe in your own country, while so many others do not. Hold on to that disgust you feel and use it to speak up against the injustice and help us make a change. To be silent is to be complicit.

WHAT YOU CAN DO TO SHOW YOUR SUPPORT!